The Burning of the Caravan

Although this was not a happy experience, it was an ordeal that will remain in our minds as we recall our ministry here in Limavady, Northern Ireland.

We purchased a small caravan to do summer outreaches in the smaller villages of Northern Ireland.  We had it parked at the new church location.  When I pulled up in the church parking lot on February 16, 2003 I was in for a big surprise.  All but one window in the caravan had been broken by stones being thrown into it.  That day, between the morning and evening services, they came back and broke the last window and threw a block through the wall.  (You wonder what goes through people's minds.)
This, evidently, was not enough to satisfy their malicious intent on the caravan.  One week later on Sunday February, 23 we were thirty minutes into the evening service when I noticed a red glow coming through our front window.  I thought a car was backing into church, arriving late.  I went over to peer out the window and see what was going on.  Horrified, I saw that less then forty feet from our front door the caravan was on fire.
My first reaction was to move our family car parked less then six feet from the focal point of the fire.  The blaze was rising high above the roofline of the church which is thirty feet. We then evacuated the building, called the fire brigade and police.  It took twenty minutes for the fire brigade to get there.  When they finally arrived there where fourteen firemen, a tanker, and a latter truck that came to the rescue. and thirty minutes for the police to arrive.  If this would had been my house it would have been a goner.
No one was hurt, praise the Lord.  The children where shaken up, heartbroken that their "Bible Bus" was destroyed, and somewhat fearful of why this happened and who started it.

I didn't think of taking pictures until it was all over.  Here are the only two I have.  The one fireman is smiling for the camera. 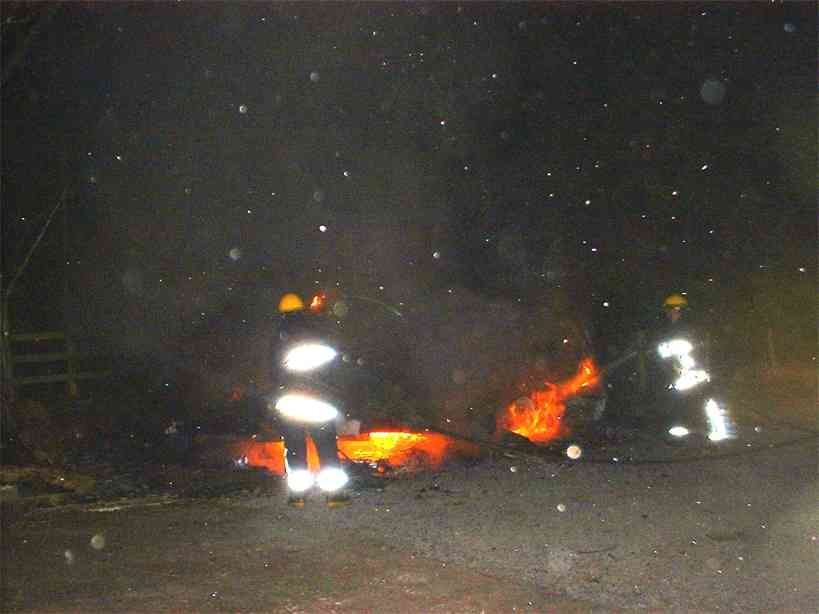 Ash was flying through the air and landing on my lens. 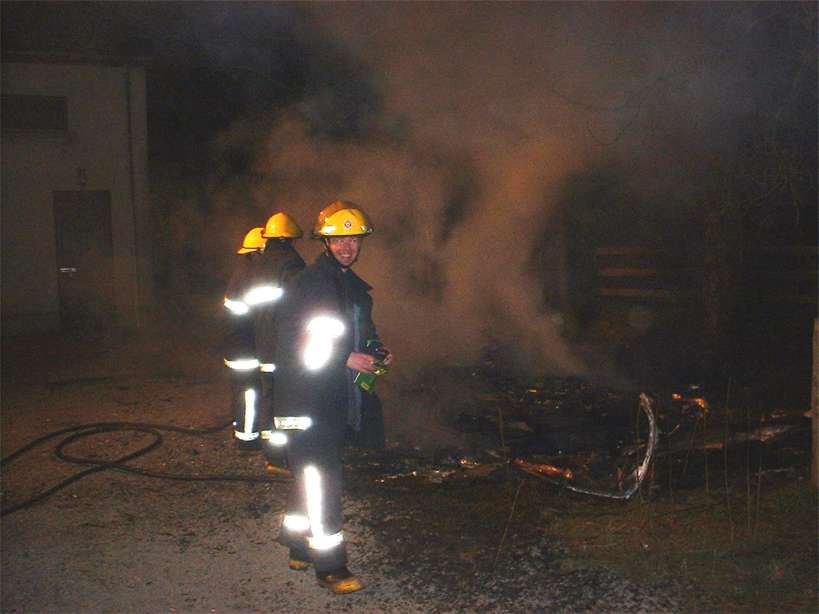 The police said there is nothing they can do.  I ask that you remember us in your prayers with the vandelism problems.  I know much worse has happened to others, much more serious property has been loss by others, and lives have been taken because of acts such as this.  We are fortunate to have only this small amount of harm done to our property.  We still serve the God who protects.  Praise His name.

I went this morning and took a picture of the remains.  It is ready for the dump. 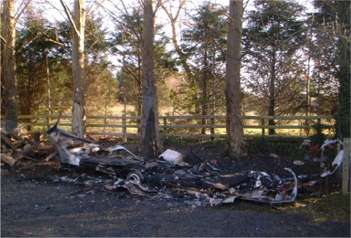